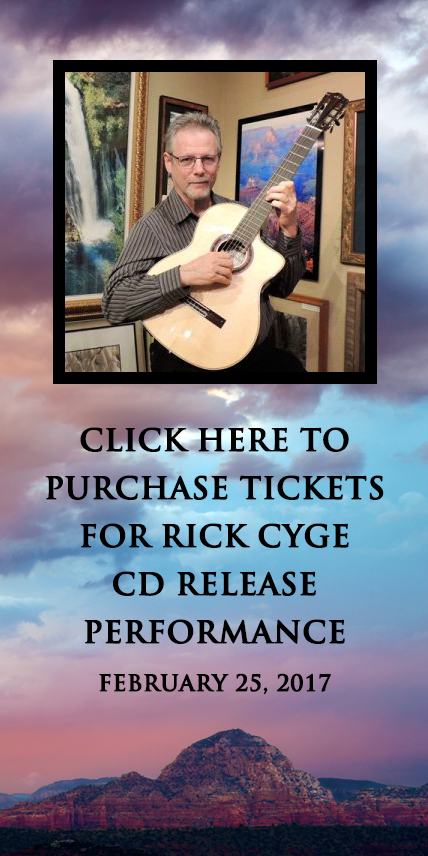 There is a new dinner and music concert series cooking in west Sedona this season. Featured Saturday, February 25, 2017 was the unique solo “Guitar Artistry” concert of Rick Cyge for his new CD Release at Greg Lawson Galleries.

Cyge comments, “We have put together a ‘Perfect Sedona Evening Out’ for each night of the new monthly concert series which offers a memorable evening of dining, live music and stunning photographic art. This new music series is collaboration with two of West Sedona’s finest restaurants, Golden Goose American Grill and Gerardo’s Italian Kitchen, and the treasure that is Greg Lawson Galleries. All are within a short walk or drive of one another: Gerardo’s is right next door to the performance, while Golden Goose is literally around the corner! By purchasing concert tickets in advance, concert-goes will receive discount coupons for use for dinner the night of the show at Golden Goose American Grill or Gerardo’s Italian Kitchen.”

Greg Lawson Galleries features Lawson’s exquisite nature and wildlife photography created from travels to every corner of the globe. “The photography is an overwhelming feast for the eyes!” Cyge adds, “I am excited to be showcasing the new album in this inspiring setting… and there will be a special guest cameo flute and guitar performance by Meadowlark during the evening!” 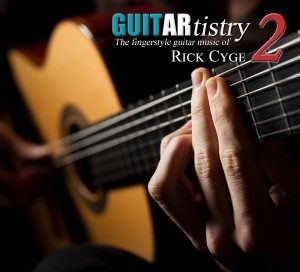 “GUITARtistry 2,” Cyge’s new solo fingerstyle guitar CD, is a follow up to his debut CD as a solo guitarist, “GUITARtistry.”  It features a sampling of Cyge’s favorite songs and melodies from the Baby Boomer era (1950’s-80’s).

Cyge explains his obsession with the era, “I was in 7th grade in New York, still practicing on the piano my Grandmother had given me as a young child when the phenomenon of The Beatles hit the US. That was it! I wanted to do THAT! By high school, I was in a rock & roll band as a lead guitarist and background vocalist. I had developed my ear to the point where I could listen to the record and pick out not only my guitar part, but the parts for the other members of the band, rhythm guitar, bass, keys, etc.”

He continues, “I left for college in ’69; another pivotal year with Woodstock that summer and the exciting new acoustic singer songwriter wave that carried luminaries including James Taylor, Joni Mitchell, Paul Simon, CSN, Cat Stevens and many others to mass consciousness. In college, I became an acoustic singer/guitarist and transitioned from electric to acoustic guitar and never looked back!”

After graduating in 1973, Cyge settled in New England, first in Rhode Island, and then relocated to the Boston area. “I became quite active in the local burgeoning acoustic music scene that spawned artists the likes of Shawn Colvin, Chris Smither, Tracy Chapman, Patty Larkin and so many others. As I continued to perform in coffeehouses and concerts around the region, I conceived of an acoustic music center that would encompass a school, instrument shop and concert venue. That vision became a reality in 1980 when I opened Wood & Strings Music Center, which was the embodiment of that vision. At that time, as I continued to hone my skills as a singer songwriter, I became aware of a brilliant young fingerstyle guitarist, Pierre Bensusan and was impassioned with that genre. I studied arranging for fingerstyle guitar with a gifted guitarist, Eric Schoenberg (The Schoenberg model that became part of the Martin Guitar line) and committed myself to perfecting that style of guitar music.” 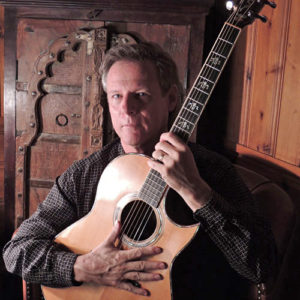 In the past few years, Cyge states he has turned his focus to assembling a vast repertoire on fingerstyle guitar arrangements of the music of the Baby Boomer era. He explains, “My approach is to identify the key elements of the song, the melody, harmonic structure and rhythmic style and weave these elements into a solo guitar piece that marries those elements into a single cohesive guitar interpretation. The first challenge is to identify songs that have the essential elements needed to create this type of arrangement. Not all great songs work as instrumental pieces and conversely, some somewhat mediocre songs translate well as solo guitar pieces! I do incorporate the use of a phrase sampler to accomplish this live with some very complex pieces such as The Beach Boys’ California Girls where so much is happening that I need to ‘layer’ some of the elements to get them all together – too much to pack into a single guitar part! I also create rhythm sections for some pieces assembling bass, drum, and percussion parts to embellish the arrangements and record these using keyboards in the studio. I use these mixes to accompany my live performance of those pieces, i.e., Steely Dan’s ‘Rikki Don’t Lose That Number.’ In the end, it is always about the solo guitar arrangement of the song.”

Cyge performed his unique fingerstyle “Guitar Artistry” with fascinating arrangements of music from Paul Simon, Elvis, The Eagles, Steely Dan, and more! See the CD track lists and listen to samples at RickCyge.com.

Spring is in the air! Bring the season into your living spaces by shopping online at GregLawson.com. Simply make your selection, place your order and we’ll ship your new art ready to hang right out of the box.